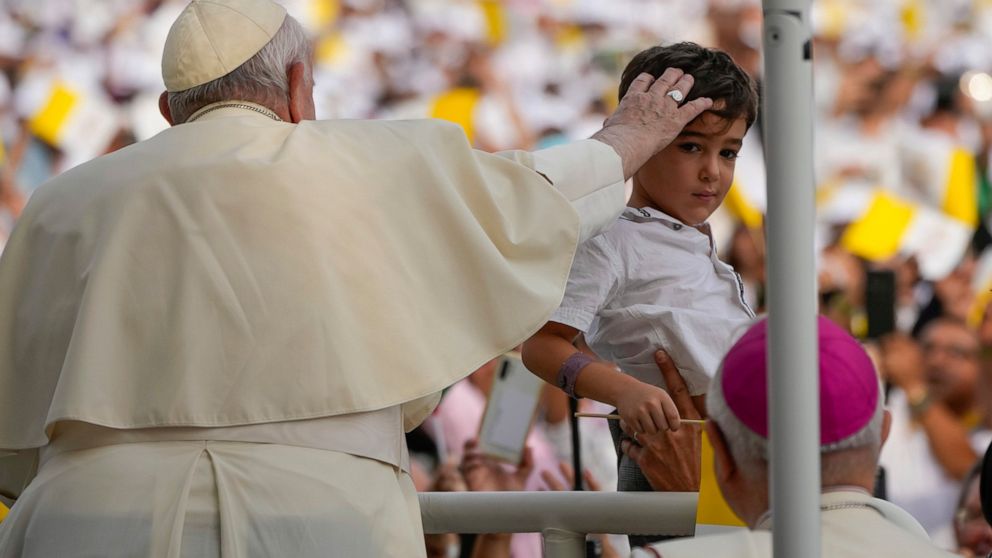 Manama, Bahrain — Pope Francis shifted gears on Saturday during his visit to Bahrain to minister to the Catholic community in the Gulf, presiding over a huge outdoor Mass, then meeting young people to give them fatherly advice: Don’t just Google your questions about life decisions, he tells them. Instead, find a parent, teacher, or grandparent who can guide you.

After focusing on Catholic-Muslim relations on the first two days of his four-day visit to the tiny kingdom, Francis was treated to the multi-ethnic diversity of the Gulf region’s Catholic community on Saturday. It is made up mainly of South Asian migrant workers who often leave behind their families to work in construction, oil extraction, domestic industries and services.

About 30,000 people, some from Saudi Arabia, Kuwait and other Gulf countries, filled Bahrain’s National Stadium for Francis’ High Mass. The English liturgy was clearly geared towards foreign workers, with popular English hymns and prayers in Malay, Tagalog and Tamil and a priest offering English translations of the pope’s Spanish homily.

“It’s actually a very big honour,” said Bijoy Joseph, an Indian living in Saudi Arabia who was in attendance. “It feels like a blessing for us to be part of our Holy Father’s Papal Mass in Bahrain.”

Francis is making the first-ever papal visit to Bahrain, a Sunni-ruled island kingdom the size of New York and located off the coast of Saudi Arabia. The main objective was to participate in a government-sponsored interfaith conference to promote Catholic-Muslim dialogue. But for the past two days he has focused on ministry to the Catholic community, a minority in the country of about 1.5 million.

In his homily at the stadium, Francis urged the Catholic faithful to do good “even when they hurt us”.

“There will be instances of friction, moments of tension, conflict and opposing views, but those who follow the Prince of Peace must always strive for peace. And peace cannot be restored if a harsh word is answered with an even tougher word,” he said. “No, we must ‘disarm’, break the chains of evil, break the spiral of violence and end resentment, complaints and self-pity.”

After mass, Francis met with several hundred young people at the École du Sacré-Coeur, which dates from the 1940s and is affiliated with the church of the same name, which was the first Catholic church built in the Gulf. The school has over 1,200 students and faculty from 29 different nationalities and various religious groups, including Muslims who study alongside Christians.

Teenage girls in saris danced for him, alumni offered testimonies, and students offered him words or wishes in more than a dozen languages.

Francis urged them to forge a future where such friendly interfaith relations will remain the norm. And then he offered some personal advice, saying he too was once a teenager and had never made a major decision on his own.

“Before you go to the internet for advice, always look for good counselors in life, wise and reliable people who can guide and help you,” he said, quoting parents, grandparents or a spiritual guide.

And then, returning to an exhortation from one of his first encounters with young people as pope, Francis urged students to always keep adults on their toes.

“We need your creativity, your dreams and your courage, your charm and your smiles, your contagious joy and that touch of madness that you can bring to every situation,” he said. Such madness, he said, “helps get us out of this”. of our outdated habits and repetitive ways of seeing things.

Francis ends his visit on Sunday by meeting priests and nuns at the Church of the Sacred Heart.

Associated Press religious coverage receives support through the AP’s collaboration with The Conversation US, with funding from Lilly Endowment Inc. The AP is solely responsible for this content.

2022-11-05
Previous Post: John Lennon’s advice to Jimmy Iovine ahead of the Elton John session
Next Post: Rail strikes are on hold – but the advice is still to only travel if you really need to