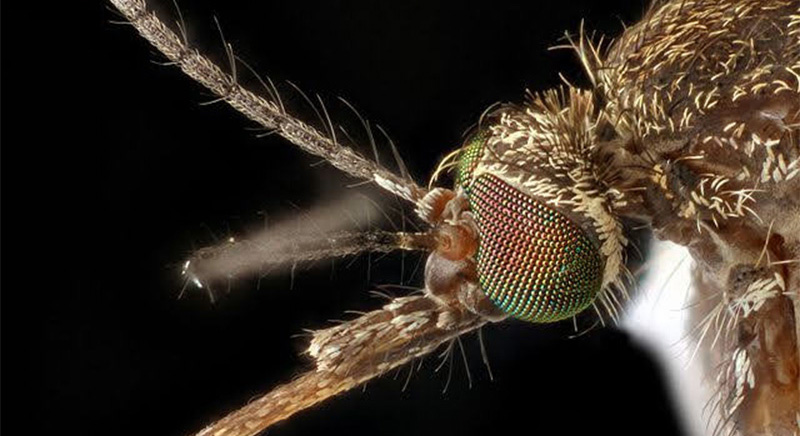 Mosquitoes may deserve more understanding, but we still have tips to avoid these pests

A pipien Culex mosquito, a species that feeds on birds and mammals. They can transmit West Nile virus. (Photo: Afro-Brazilian via Wikimedia Commons)

Fifty-one species of mosquitoes live in Massachusetts (and 200 in North America!). That’s a lot of mosquitoes; however, only a dozen species transmit diseases that make people sick.

You will find most mosquitoes in moist, shady areas with lots of plants – they need water to lay their eggs and plants to hide from predators.

The main food source for mosquitoes is plant nectar and fruit juice, but female mosquitoes also need blood to produce eggs. Therefore, only females bite. To find a blood-carrying victim, they follow the streams of carbon dioxide that animals, including human animals, exhale, and can find a stream of carbon dioxide 50 feet away. Mosquitoes also concentrate on the lactic acid produced when you sweat.

Different species need different blood types. Some feed on birds, turtles and frogs. Others prefer mammals like horses and humans. Some bite birds and mammals, and they are the ones that can spread disease between birds and horses or humans. In Massachusetts, it is West Nile virus or Eastern Equine Encephalitis. EEE is not an issue in Cambridge as horses are not prevalent, but West Nile virus is present here – currently the level of risk is moderate. Review this risk map to assess virus levels in different parts of the state and what you can do to protect yourself. 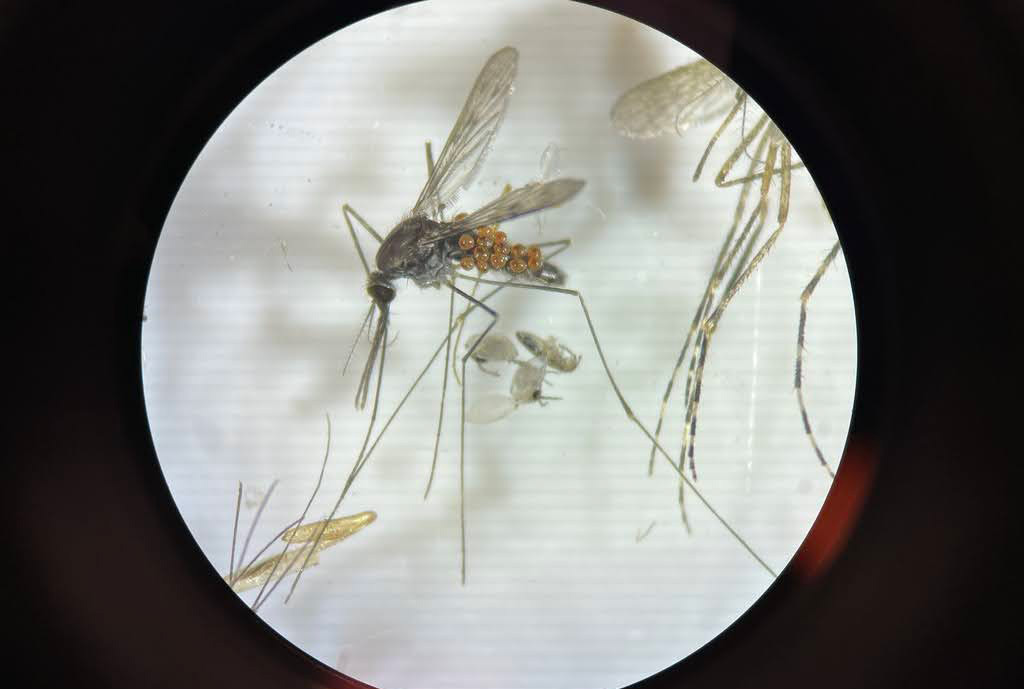 An adult female Anopheles quadrimaculatus mosquito captured in Florida in August. This mosquito has parasites – larval mites – on it. (Photo: Kaylyn Cullen at the Beach Mosquito Control District)

West Nile first hit people in 1999 in New York. The following year, it infected people in 12 states. Today, it is found in many species of birds and mosquitoes in North America, and from 1999 to 2010 it infected more than 2.5 million people. Fortunately, 80% of infected people do not develop any symptoms. The remaining 20% ​​may develop flu-like symptoms: fever, headache, body aches, joint pain, etc. In extremely rare cases, the virus can lead to encephalitis or death.

Although mosquitoes seem ubiquitous in some places, most females live only two weeks and most males only one. A female lays her eggs on the surface of a pool of water. Each hatches into a larva, sometimes called a wiggler, within two days. Over the course of five days, each growing larva molts several times; feeds on microorganisms, plant debris and other organic particles in the water; and eventually develops into a pupa. The pupa does not eat and grows in water for a few days until it emerges as an adult mosquito. 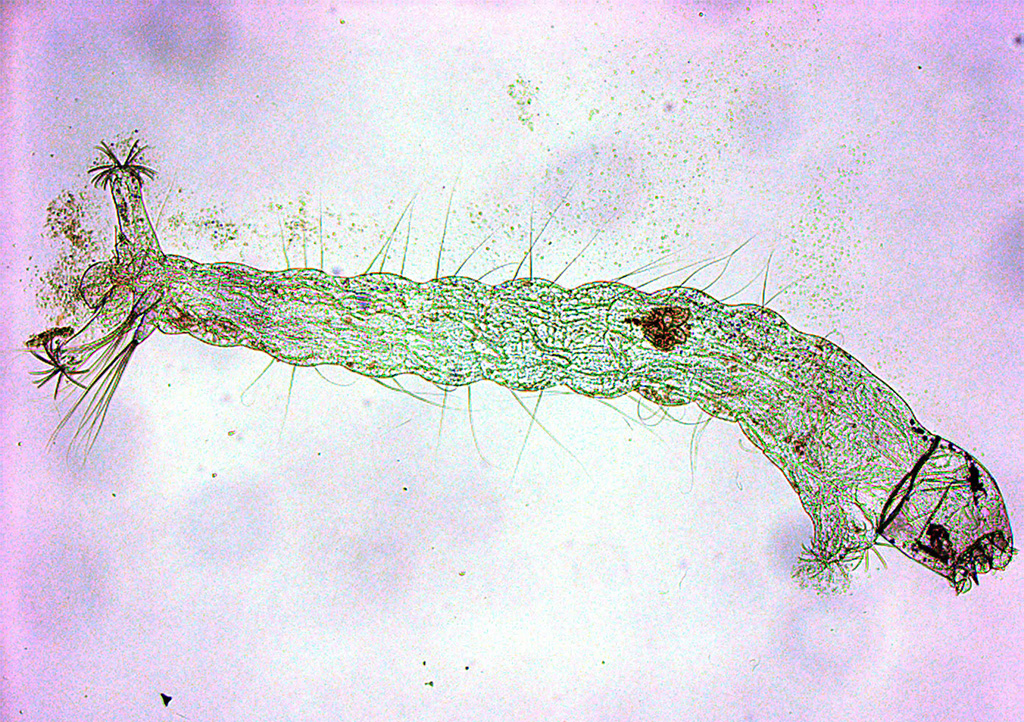 A photomicrograph of a Culex mosquito larva taken in a pond. (Photo: Dawolf000 via Wikimedia Commons)

Early Europeans in North America encountered many diseases, including malaria, but did not know what caused the disease. An Italian Doctor Decided It Must Be Due To “Bad Air” In Swampy Areas, So He Called Him malaria. According to Historia Obscura, in the late 1700s and 1800s, less than 20% of European settlers on the South Carolina coast lived to be 20 years old. Most of the children died of malaria. This was partly due to poor drainage around the towns and partly due to the cultivation of rice in the wetlands: these settlers were unknowingly breeding malaria-carrying mosquitoes as well as rice.

Malaria may even have helped the United States gain independence from Britain. According to the Smithsonian Magazine, in 1781 General Charles Cornwallis wanted to move his army north to Virginia to avoid “the deadly disease which nearly ruined the army” the previous summer. His superiors said no, and Cornwallis went to Yorktown instead. There, malaria took hold. By the end of the summer, more than half of his men were too ill to serve. In October, healthy Continental American troops fresh from New England and French troops defeated sickly British troops at the Battle of Yorktown, the last battle of the American Revolution. 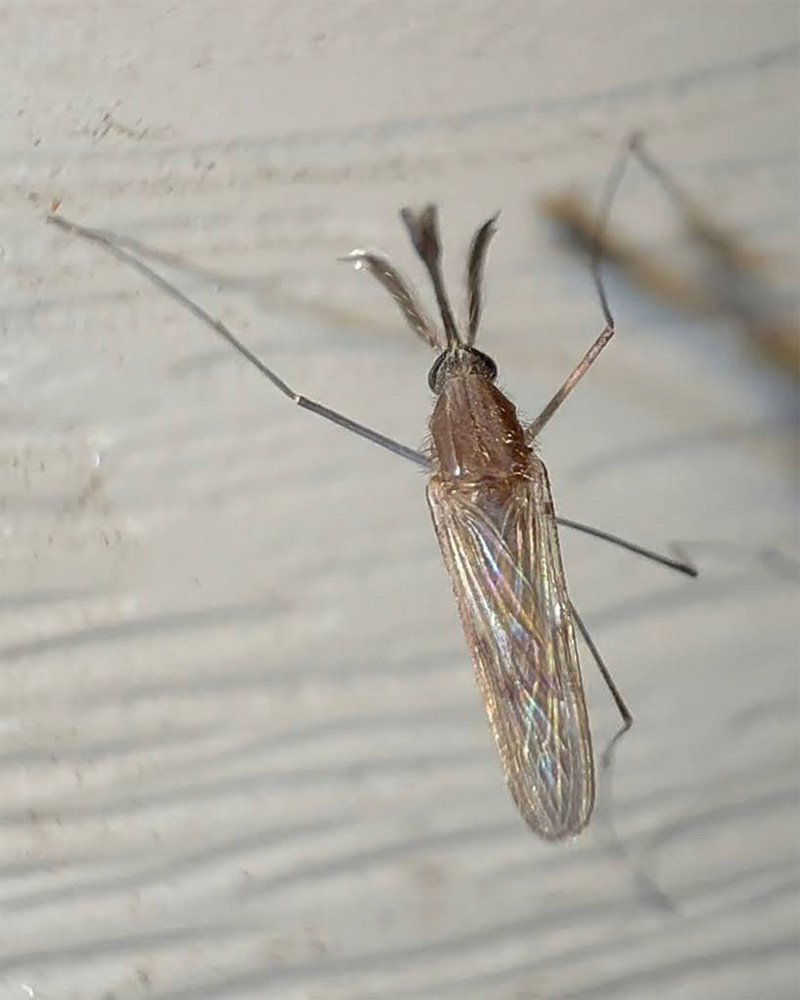 An Anopheles quadrimaculatus mosquito near Baltimore in August. These mosquitoes can transmit malaria in areas where malaria is prevalent. (Photo: Whitni Brown)

Mosquito-borne malaria was common before the 20th century. Maybe a lot of people remember the scene from “The little house on the prairie” in which everyone in the Ingalls family agrees? “All the settlers, from one end of the creek to the other, had fever and fever. There were not enough healthy people to care for the sick. The family is only saved from delirium when Dr. George Tann, a black doctor lured to Kansas by the Homestead Act of 1862, stumbles upon them and treats them.

What can we do against mosquitoes today? Spraying for them also kills other insects, including beneficial bees and butterflies, caterpillars and crickets, beetles and dragonflies, and spiders. Ninety-six percent of land birds depend on insects (mainly caterpillars and spiders) for their survival to feed their chicks, so the spray also harms them and other animals. higher up the food chain that feed on birds. Insect and bird populations in North America are plummeting and pesticides are playing a big role. Mosquitoes are also an important food source for many other creatures – from dragonflies and bats to turtles and frogs. 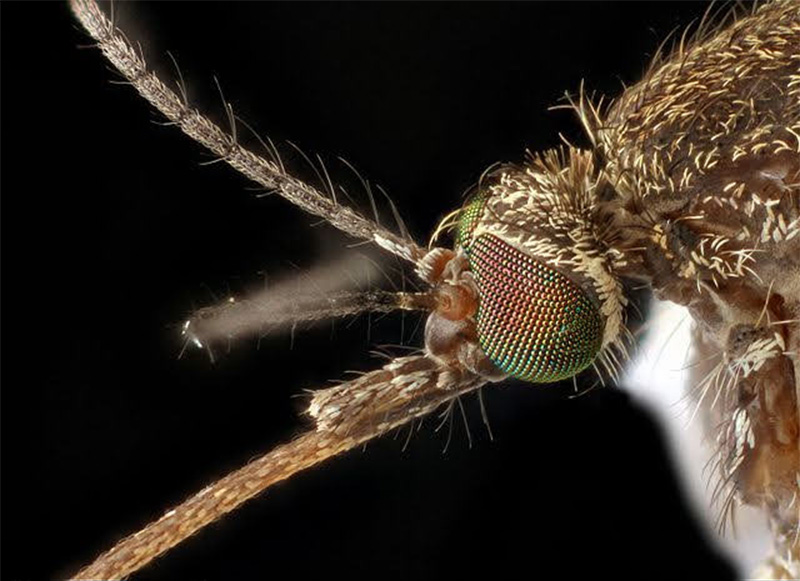 A female Culex mosquito found on a small pond. Most mosquitoes are active from dusk until dawn. (Photo: Alex Wild/Insects Unlocked, via Wikimedia Commons)

Some of the best ways to keep mosquitoes from living in your garden are to remove standing water or, if you don’t want to remove the water (like in a bird bath), empty it every other day. and start from scratch. If you can’t drain the water, try using mosquito dunks, which release bacteria that target mosquito larvae and biting flies, but are harmless to other wildlife.

An organic farm in Cape May, New Jersey, a stopover for migrating birds, had a major mosquito outbreak one year and used an ingenious method to get rid of these pests while protecting crops and birds from insecticides: County officials used dry ice — frozen carbon carbon dioxide that sublimes into carbon dioxide — to attract mosquitoes to a tiny area where they used a small amount of insecticide spray. The farm has since reduced mosquito breeding without using insecticides.

If you want to enjoy the outdoors at night, wear light-colored clothing – mosquitoes are more attracted to dark than light clothing – and use a few fans to keep pests away. It’s true. Fans. Studies have shown that the wind can disperse the carbon dioxide we exhale, while the breeze from a fan cools you; you sweat less, emitting less lactic acid. Contrary to popular belief, the wind does not make it difficult for mosquitoes to fly, but simply allows them to find your carbon dioxide flux.

As high school teacher Bert McCoy said, “If you stay long enough in paradise, you risk getting bitten by mosquitoes. There are steps we can take to protect ourselves, however, without harming heaven at the same time.

Have you taken any pictures of our urban wild things? Send your images to Cambridge Day, and we may use them for future functionality. Include the name of the photographer and the general location where the photo was taken.

Jeanine Farley is an educational writer who has lived in the Boston area for over 30 years. She loves taking pictures of our urban wild things.

2022-08-20
Previous Post: In Bed With Vyoma Nandi: “Dating Advice That Never Works? ‘Go With The Flow'”
Next Post: Essex Fire Services offer advice in the event of a flood warning