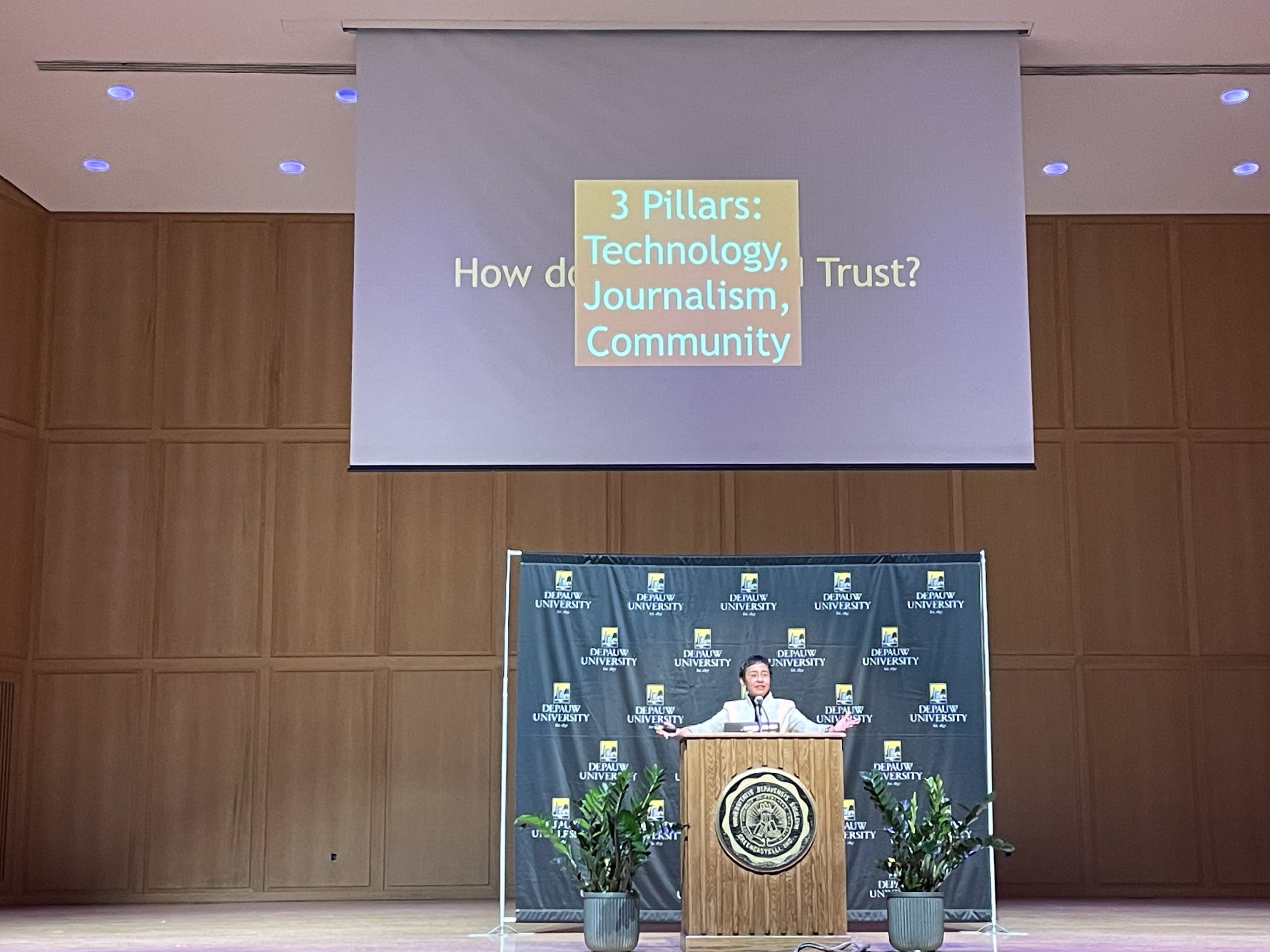 On November 2, 2022, international journalist Maria Ressa delivered the Timothy and Sharon Ubben Lecture at DePauw University. Prior to our talk later that evening, media and students had the opportunity to ask Ressa questions about her career as a journalist and offered advice for students who want to pursue a career in journalism.

During the media session, when asked about her career plans, Ressa gave some insight into the career her parents wanted her to pursue and how she ended up pursuing journalism full-time.

“I went to pre-med for two years because my parents wanted me to be a doctor. Then I finished college, but what I didn’t know was that I went looking for roots. [In] my senior year in college, I got a Fulbright scholarship the other way to the Philippines, and I never left,” Ressa said. “It was in 1986 when people power arrived and ousted Ferdinand Marcos, whose son is now our president, elected by an overwhelming majority last May. It held me back because I fell into journalism.

She continued, “I think the reason I loved the theater was in a room full like this, we can actually come to a meeting of the mind… We can talk, we can change, [and] we can change the way we see the world.

Ressa’s ethnic connection to the Philippines was also a major element that kept her there to pursue international journalism coverage.

Ressa said, “I fell into journalism in the Philippines because part of it was roots. You can tell my age because that was when “Roots” was, and I went back there and realized that I never felt completely American when I was growing up in…Tom’s River, New Jersey. When I grew up here, I was an introvert. I was pretty calm. I had to learn English because [as] I was growing up, we spoke Tagalog, and then I never felt completely American, [so] I thought that meant I had to be Filipino.

Then, reality hit her once she arrived in the Philippines on her Fulbright as the phenomenon of how her American identity made her stand out from other Filipinos.

“When I went back to the Philippines with Fulbright, that’s when I realized how truly American I was. When I’m with Filipinos, I’m very American, and when I’m with Americans, I’m very Filipino. Then you learn how to merge these different parts [and] make the most of it,” she added.

For journalism in his time, Ressa refers to it as a golden age of journalism. She refers to this as a time when journalists were given resources to do good journalism and a TV crew was four people instead of one. She then begins to describe her exploits and her coverage of the People Power movement in the Philippines and how it affected surrounding countries.

According to Ressa, “It was an amazing time. 1986 is when People Power came along, [and] it was the time when we thought democracy was unstoppable. The [revolution in the] The Philippines expanded to South Korea, Myanmar, and then even Vaslav Hvuelle in Czechoslovakia [who] mentioned the People Power revolt in the Philippines.

From then on, Ressa would open the Manila office in 1987-88 and later open the Jakarta office in 1995. Here, she also details what made her love journalism and the issues journalists face every day. in the essence of the report. .

“What I loved and why I love journalism is because it felt like every day I was meeting people, learning, and it wasn’t like today, where I I feel like we shouldn’t be chasing page views, chasing popularity, or we shouldn’t be commodifying journalism because our job is to hold power to account,” she said.

Ressa continued to emphasize this point, adding, “The mission of journalism is very, very, simple, isn’t it? It takes courage and training to do this because you can never go wrong. Because when you’re wrong, it could mean your career.

Over the course of Ressa’s career, she has faced many challenges in pursuing information to her audience, facing arrests by higher authorities, and more, but in the face of government censorship, she has the following tips to share with young journalists:

She continued: “As a journalist, you are much more alone today than at any other time. Precisely because social media has made it so. At the time, my organization stood together and I rarely had to face attacks except when you were in the field. Frankly, that’s easy compared to the landmines we’re browsing on social media today.

Using references to “The Matrix” and “The Truman Show,” Ressa went deeper into the details of social media and its effects on us as a society.

“I described another way [to] describe social media… It’s like “The Matrix”. Remember how the human beings of the body are the batteries of the Matrix? We are the energy that social media platforms deprive themselves of because they take our data and basically clone us and then they own that… We are the batteries but take “The Matrix” [plus] “The Truman Show.” Each of us does our own Truman Show. And, the question is, are we listening to each other?

For new journalists emerging in the digital age of journalism, Ressa advises the following:

“First you have to build yourself. Build your body of knowledge, build your body of experience; it’s like going to the gym, isn’t it?… The second thing is that you don’t have to wait for organizations anymore. You can really experiment and find your own voice. But, I would do the third thing you write for your school journal.

She continued, “What does the school newspaper do? What is your presence on social networks? Right now, your school newspaper may actually be battling the New York Times in your neighborhood. You should actually hold this community in your hands, so building and distributing the community would be the next step. And it’s a whole different ball game than when I was a young journalist. It is a time of creative destruction.

2022-11-11
Previous Post: Rhode Island Bathroom Remodeling offers professional advice on how to maximize your bathroom space
Next Post: Karren Brady’s career advice for having an awkward conversation with a colleague