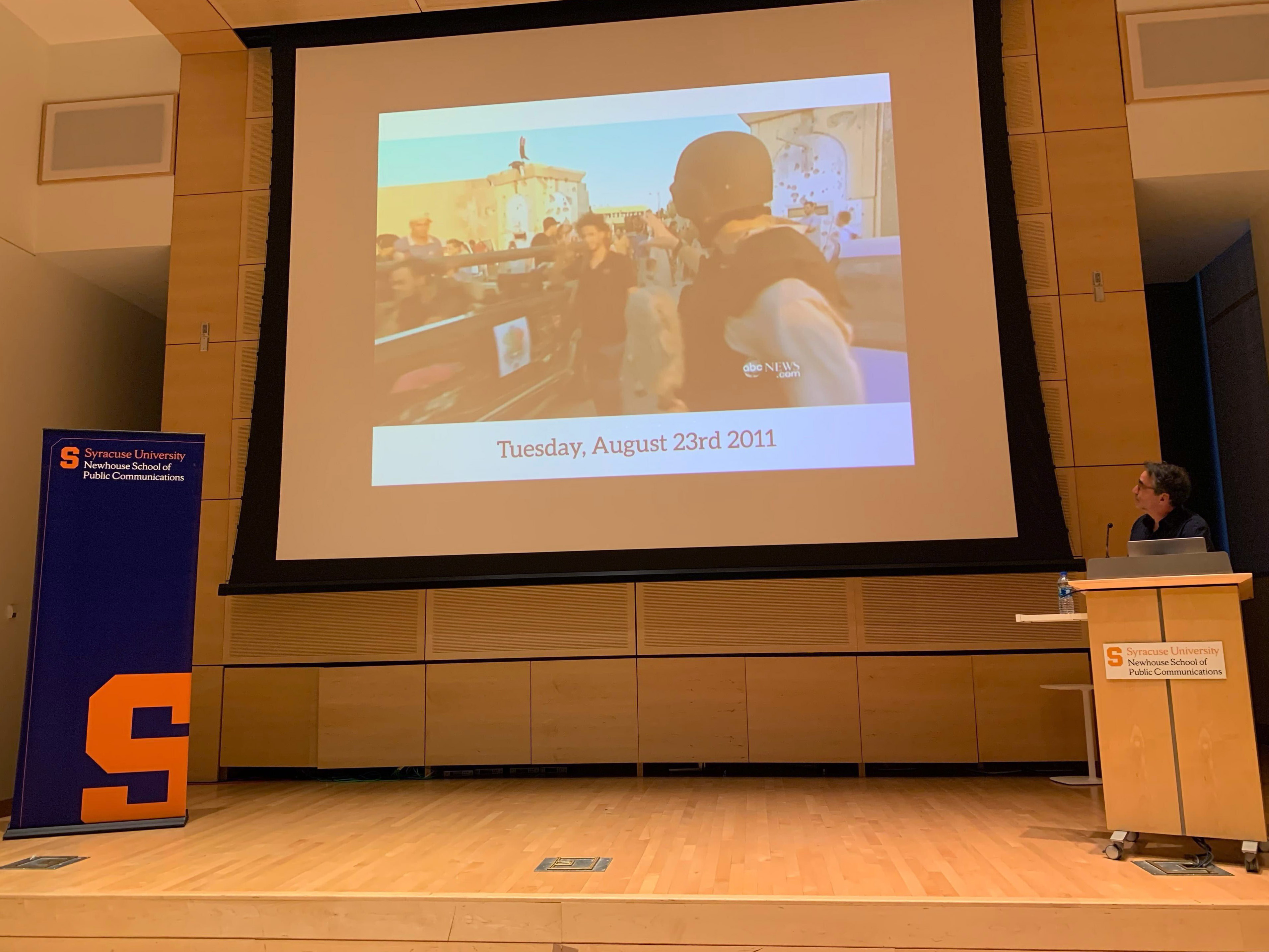 Get the latest news from Syracuse delivered straight to your inbox.
Subscribe to our newsletter here.

Jeff Kofman is a storyteller. With more than 30 years of reporting experience in the United States and abroad, Kofman’s knowledge of reporting is deep and diverse, with stories about the 2004 Haitian coup, 30 men trapped in a collapsed Chilean mine and the war in Iraq under his belt.

On Tuesday night, Kofman brought his reporting expertise to the Joyce Hergenhan Auditorium at the Newhouse School of Public Communications to talk to students about his coverage of the Libyan revolution, a story for which he won an Emmy. Kofman’s lecture, titled “Storytelling in Conflict: From the Frontlines of Libya to the Trenches of Tech”, traced his journey as a journalist in Tunisia and Libya during the Arab Spring in 2011 through his current work as a founder and CEO of Trint, an online transcription service.

Kofman began his presentation by clarifying what the Libyan revolution was and where his reporting was geographically located. Using a PowerPoint presentation, Kofman illustrated what the wider Arab world is all about – the 22 countries in the Middle East and North Africa that make up the Arab League.

In January 2011, Kofman, who worked in the London bureau of ABC News, was first briefed on political unrest in the Arab world, which would set the stage for the upcoming Arab Spring.

“The foreign publisher, I remember, jumped in and said, ‘Well, I never thought I’d start by talking about Tunisia, who knows where that place is, but they’ve just had a little revolution,” Kofman said. “Twenty-eight days later, the dictator who ruled Tunisia for 22 years has fallen.”

This revolution in Tunisia created a ripple in the rest of the Arab League in 2011, otherwise known as the Arab Spring, Kofman said. He was sent to Libya on a mission to cover the conflict over the country’s dictator Muammar Gaddafi, who had oppressively controlled the country since 1969. Kofman also said Libya’s geopolitical importance stems from its position as a major supplier of gas and oil in southern Europe. .

After serving as a foreign correspondent in various countries, Kofman took a moment to explain how he covered stories overseas. Kofman worked with a small team on assignment, which included two security guards – one of whom was a paramedic – a producer, a cameraman and a translator. The team used satellite phones and a BGAN, a small satellite connector that allowed the team to send images from Libya to the ABC News bureau in New York, while they were in the field. Kofman said using the BGAN highlighted a big truth about foreign reporting: High-stress stories about global conflict are often more about transmission than journalism.

As Kofman continued to tell his story, he reflected on his journey through the Sahara Desert to Tripoli, the capital of Libya. Across the desert, he encountered the bodies of Libyan rebels who died during the conflict, which he said was a powerful thing to behold. Kofman also said that during the drive through the Sahara, their vehicle broke down several times, delaying the ABC team’s ability to get to Tripoli in a timely manner.

When Kofman and his team were en route to Tripoli, he said much of the footage they transmitted to New York was not shot live, or by his team itself. Kofman said it was simply part of modern foreign correspondence.

“That’s what foreign correspondent work is today; you very rarely film all of your work,” Kofman said. “It was all the agency footage from the BBC, Associated Press, maybe Reuters, etc. that was picked up in New York and put together. That’s the nature of journalism at this level, the most of the time.

Once Kofman’s team arrived in Tripoli, however, they spent much of their time in war-torn areas gathering footage and interviewing locals. In a clip Kofman showed of his work, he and his team were shot by snipers at Gaddafi’s compound. The same clip shed light on the dangerous and often frightening conditions the citizens of Tripoli lived to win the revolution.

At the end of Kofman’s speech, he stopped for questions from the audience. Many were about how Kofman dealt with his mental and physical health while dealing with trauma in his professional life. Others asked how Kofman balances fear and professionalism in harrowing situations, to which Kofman said fear was not absent from his work as a journalist, but he learned to manage it.

The final question of the night was a request for advice from Kofman on penetrating the foreign correspondence industry, which he responded with advice for those interested in global and domestic journalism.

“It’s tenacity; it’s perseverance — you have to want to do it. You have to believe you can do it. And you need a little luck,” Kofman said.

2022-04-27
Previous Post: First overhaul of good medical practice guidance in a decade targets toxic workplaces
Next Post: Jose Mourinho’s quick response when asked if he had any advice for Erik ten Hag at Man United